Gift Guide for the BOYS!

On the road again…We’re driving back to Texas today after spending a few fun days visiting Missouri.  I’ve been promising this Gift Guide for the Boys in your life and today is the day!  Bowen turns seven tomorrow and Nixon is nine.  My boys are both into playing sports preferably outside with a bunch of neighborhood kids and they’re both out of the toy stage, which makes Christmas shopping both easier and harder in different ways.  Poor Bowen got out of that toy stage pretty early thanks to older brother, Nixon.  And like all my other gift guides, I’m sharing only things my boys have and love or things they’re truly asking for this year.  Just wanted to share a little about mine-in case the boys in your life are similar.  🙂 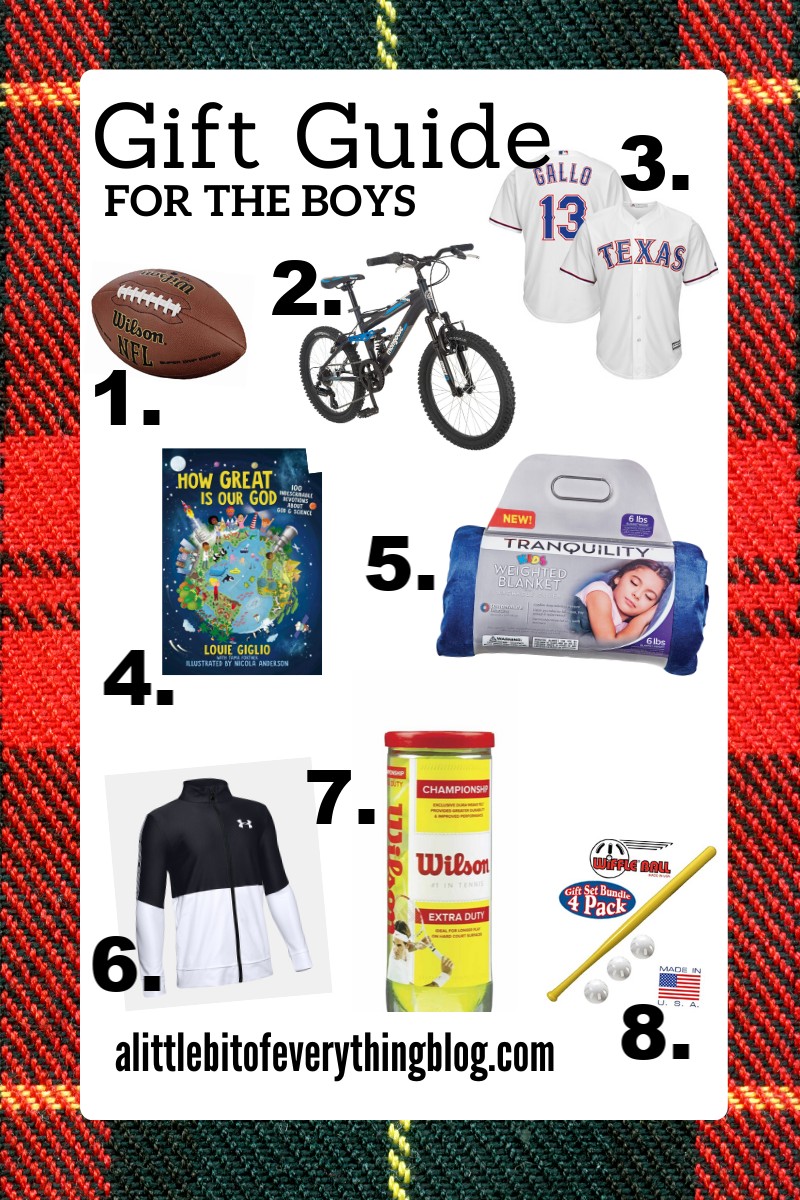 1.  Football-You can’t have enough footballs-or at least that’s what the boys in my house think.  This football comes in both a junior size and an official size.

2.  Boy Bike-Both of my boys have outgrown their bikes.  Nixon wants the bike I linked, but Bowen isn’t near as picky.  We’ll make sure we have two different colors so they look nothing alike.  Can you sense a theme in the Slaughter house?  Every kid is getting a new bike for Christmas!

3.  Jersey-Both of my boys are officially in the jersey stage of life-if there is such a stage for kids?  Whether it be their favorite college team, NFL, MLB, etc…they both have a couple jerseys on their Christmas list.

4.  How Great is Our God-This is a new devotional by Louis Giglio that my boys will be getting for Christmas.  This book uses science to explain how awesome God is.  I’m so excited for my boys to start reading!

5.  Weighted Blanket-Nix gets his bet sleep when we pile on all kinds of blankets and pillows on top of him.  That might sounds scary but I promise he can breathe and is safe.  I’m gonna get him this blanket and if he loves it and would prefer a little more weight, we can upgrade it later.

6.  Under Armour-Nixon and Bowen are both really into Under Armour clothes.  They’re officially out of the toy stage, but they’d both be super pumped about a new sweatshirt, tights, shorts, etc.

7.  Tennis Balls-My boys have gotten this can of tennis balls for the last several years in their stocking and still-every year at some point every tennis ball is lost and they’re asking for more.

8.  Wiffle Ball Set-My boys are either inside complaining about the weather or outside playing some type of sport with a gang of neighborhood kids.  This wiffle ball set gets used ALL THE TIME.

What about the boys in your life?  What are they asking for for Christmas this year?  Thanks so much for reading today, friends!  Hope you’re having a great week so far!  See you tomorrow for What’s Up Wednesday and a special birthday celebration post!
XO
Christmas Gift Guide
5 Comments
Share